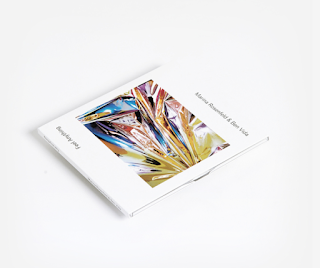 Fractal, electro-acoustic improv from NYC’s Marina Rosenfeld and Ben Vida, conjuring a steeply layered investigation of proprioception and dreamtime psyches...
Marking Marina’s first appearance since the resoundingly unusual electro-dub of her ‘P.A. / Hard Love’ [Room 40, 2013] recordings with Warrior Queen, and also Ben Vida’s follow-up to ‘Damaged Particulates’ [Shelter Press, 2016], their probing collaboration is a wicked exercise in vivid, abstract terraforming.
As they both hail from NYC, it’s possible to hear the 8 parts of ‘Feel Anything’ as a gyring, topographical reading of their environment. In bifurcating formations they strafe and wind thru varying densities of tone and space in sloshing meter, scaling the listener’s focus from vertiginous showers of sparky electronic scree to demolished string orchestrations and wide, abyssal bass in fractious permutations.
We can instantly recognise some of Marina’s signature, eerie dub touches carried over from her ‘P.A. / Hard Love’ EP, but here they are unsettled, unstuck by Vida’s nervy tics and persistently amorphous electronics until they both effectively form a sort of vaporous free jazz describing the waveform-like outline of urban panoramas and the insectoid scuttle of busy populations, scurrying up and down and thru skyscrapers, subways, lofts and streets.
Feel Anything