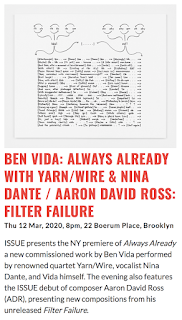 As part of a series of celebratory events at ISSUE’s 22 Boerum theater, Thursday, March 12th, ISSUE presents the New York premiere of Always Already, a new commissioned work by Ben Vidaperformed by renowned quartet Yarn/Wire, vocalist Nina Dante, and Vida himself. Previously both ISSUE Artists-In-Residence, this is the first ever collaborative project between Vida and Yarn/Wire. The evening also features the ISSUE debut of New York based composer Aaron David Ross (ADR), presenting new compositions from his unreleased Filter Failure song cycle, accompanied by self-made animations.
Always Already is a text based composition for electronics, voice and ensemble. It is a hypnotic examination of the materiality of language that emphasizes the rhythm of speech through repetition and variation. Composed and performed by Ben Vida with Nina Dante and Yarn/Wire, this new work expands on the compositions for small vocal ensembles which Vida has presented at such venues as the Kitchen and BAM.
Always Already is the first of these pieces to include live instrumentalists. Keyboards, marimbas, electronics and voices are braided together to produce a mesmerizing ramble of language and notes. The works abstract narrative was developed out of a dense cyclical text which was inspired by the rhythmical essays of Gertrude Stein, the Gysin/Burroughs cut-up method and the parsing systems of the Conceptual Writers.