Reducing the Tempo to Zero 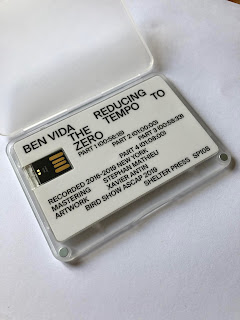 Shelter Press cap 2019 with a steeply hypnotic, four hour long immersion into the liminal boundaries of Ben Vida’s digital and analog synthesis - one of the most immersive and moving releases we’ve heard this year and an unmissable trip for followers of Eliane Radigue, Dennis Johnson, La Monte Young, Morton Feldman or anyone who fell deep into Jim O’Rourke’s recent, similarly epic 'To Magnetize Money And Catch A Roving Eye’ set.
Ben Vida’s first solo release in three years finds him fully consumed by ideas on perceptions of time, grain and tone. In four glacial movements he commits a vast array of dematerialised drones which, while ostensibly minimalist, are rich with sonic phenomena and granular details that become apparent with focussed listening. The work is the result of Vida’s own daily practice involving deep, sustained listening processes, as he strives to achieve the rarified effects evoked by seminal minimalist works from the ‘60s to the ‘90s which, like this one, combine ideas from maths and non-Western tunings with the tireless capacities of electronics to highlight the most intimate and elemental sonic phenomena and manifest their transcendental nature with meditative effect.
Perhaps the best metaphor for this sound is the idea that still waters run deep. The oceanic scale of the album mirrors a rich sense of inner life to Ben Vida’s music, highlighting through its glacial developments the paradoxical relationships between perceptions of macroscopic density and granular, nanoscopic detail that draws the ear between the concrete, discrete and ephemeral nature of his sounds. While rich in detail, the piece gets really interesting in its transitions between the tidal swells of its many parts, when the diffracted flow results in strange, ear-probing junctures of sonic phenomena and arcing harmonic formations begin to reveal themselves in monumental events.
A challenging amount of endurance is required to follow the full shape of ‘Reducing The Tempo To Zero’, but once caught in its temporality the effect is remarkable, recalling to our minds the character in Ballard’s ‘Myths of The Near Future’ who suffers from delusions that he’s an astronaut, and who begins to perceive a loosening of the boundaries between past, present and future amid the shimmering golden light of Florida. Swap space for the ocean, and the ocean for inner space, and Vida’s sonorous 4 hours of swimming sound have the capacity to supply a overwhelming subjective experience for those with an open imagination and precious spare time on their hands to get better acquainted with their own grasp of time. One or the holidays then.