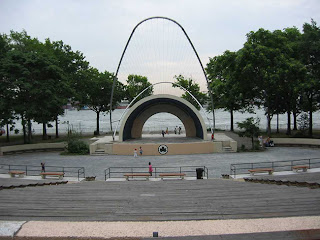 ROOM FOR STORMS OPEN AIR LIVE (2012)
October 5, 2012, 7PM
EAST RIVER BAND SHELL
What does a hurricane sound like? How about a whole season of them?
Three New York-based composer-performers will offer their takes as they improvise accompaniment to satellite footage of the 2008 storm season, projected in East River Park’s bandshell as part of artist Birgit Rathsmann’s Room For Storms series.
This installment, the third in the series, features musicians Alan Licht, Ben Vida and Doron Sadja. Their music draws on a wide range on styles, including analog and digital synthesis, and all of them are keen collaborators. Each musician will accompany a 15-minute screening of satellite footage of all hurricanes in the Atlantic Basin between April and October, 2008, created and donated by the National Oceanographic and Atmospheric Administration.