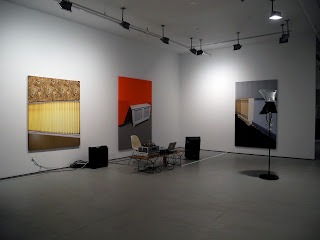 The following event will take place at Elizabeth Dee Gallery in conjunction with Meredyth Sparks’ exhibition Striped Bare, Even and Again, September 15- October 29, 2011.
The event is free and open to the public.
Thursday, October 13th, 2011, 7pm
Sound Installation and Performance by Ben Vida
In conjunction with Meredyth Sparks’ sculptural work titled, “Figure One. The Baroness’ Bucket,” as well as her paintings of covered radiators, both on view in Striped Bare, Ben Vida will perform a new musical composition whose point of departure uses field recordings of radiator sounds and melting ice that Sparks has made over the last several years. Existing in a space between sound installation and traditional linear composition, Vida’s performance will feature wave fields that change in relation to where one is positioned in the gallery. The composition will last 54 minutes and 6 seconds (a duration that Vida devised in relation to Walter de Maria's Broken Kilometer; an installation whose environment and radiators provide one of the original sound sources.) and can be experienced in its entirety, but can also be entered into at any time during the performance. Visitors should feel free to move around the gallery and come and go as they please.
Ben Vida is a composer, improviser and sound artist whose work includes pieces for analog/digital hybrid synthesizing systems, acoustic compositions and multi-channel sound/video installation art. Over the last decade, Vida has released music under several monikers, including Town and Country (Thrill Jockey), Singer (Drag City) and Bird Show (Kranky), as well as in ensembles led by musical pioneers like Tony Conrad, Rhys Chatham and Werner Dafeldecker. Vida’s recent releases include a split LP with Keith Fullerton Whitman, put out by Amish Records/ Required Wreckers, and a split LP with Andy Ortmann on Nihilist Records.
Elizabeth Dee Gallery
545 West 20th Street (between 10th and 11th Aves.)
New York, NY 10011
Posted by Ben Vida at 7:08 AM